Designed and updated by Helen Proctor.

Comments and questions are appreciated.

One of the pickleball founders - Barney McCallum – A Wonderful Life

The pickleball world has lost its last living founder, inventor and a pioneer of this great sport. Barney McCallum passed away at his
home in Seattle, WA on Monday, November 18, 2019. He was 93 years old.
His sharp wit and humor will be missed, in-depth conversations, his amazing storytelling, and his true friendship and positive outlook on all things. Barney had an amazing memory, often recalling and sharing his life experiences as he interweaved them into the conversation.

​
Barney lived an interesting, full life that held many chapters. One chapter of his life began in 1965 when Barney was one of the
three founders and creators of the sport of pickleball. At that time, Barney was 39 years old, married with four kids, and was busy
running one of the businesses he started in Seattle, the McCallum Envelope Company.

In 2013, Barney had long sold Pickle-Ball® Inc. to his son and had not been to a pickleball event/tournament in decades. At Jennifer Lucore’s urging, to which Barney exclaimed, “Let’s check out what pickleball is up to!”, he attended the popular SeaTac
indoor tournament held in Washington state. Later that year, Barney attended his first USAPA Nationals in Buckeye, AZ. Barney sat courtside for several matches and was a special guest speaker at the USAPA Ambassador Dinner. Barney said his visit to Nationals was “overpowering” and “just a thrill.”

For the next several years,  Barney would get constant updates with the happenings of pickleball from Jennifer Lucore, Alex Hamner, and his many pickleball friends and family via phone calls, mail, and personal visits. Jennifer and Alex visited Barney periodically and stayed with him in Bainbridge Island every July (usually right after the Canadian Nationals) for six years in a row… priceless!

2017 brought the creation of the Pickleball Hall of Fame and Barney was one of the first inductees that year.
In 2018, Barney returned with family to Nationals when it was held for the first time at Indian Wells Tennis Garden in the California
desert. He had been there many times for big tennis tournaments, but to enter such a prestigious venue that had a week full of only pickleball – he could not believe it. He was impressed.

Throughout 2019, the monthly talks about pickleball and the things that are happening continued. His hope was to attend
Nationals again but decided it was best to stay closer to home. In September he celebrated his 93rd birthday, and hundreds of
pickleball players from around the world sent him birthday wishes. Barney shared that he spent many hours reading all the notes he received and how much he appreciated receiving them. He was overjoyed with the outpouring of love and the various uplifting and life-changing pickleball stories people shared with him.

An early chapter of Barney’s life was shared in this Around the Post column printed in the Sept/Oct 2019 issue Pickleball
Magazine:

Not Just Your Everyday Veteran Pickleball Player.
It was 1944, and like many boys his age, Barney McCallum joined the U.S. Navy in order to serve his country during World War II.
Told that he needed to finish high school first, Barney reported to Recruit Training just two days after graduating at the age of 17.
Assigned to a ship for the next two years as a Deck Seaman (deck seamen are charged with managing the ship while going
into and out of port, as well as maintaining the ship’s appearance and keeping the deck secure), Barney was recognized as being a very strong guy who was not afraid of heights. So he was tasked with climbing the 70-foot-high mast to pull the boom up and
secure it whenever the ship would leave port. This could be particularly dangerous when the ship was already in motion.
Barney remembers one of the most challenging climbs leaving port in San Francisco as the ship went under the Golden Gate
Bridge in a storm – it was just him and the elements 70 feet in the air.
Most of Barney’s Naval service was spent traversing the Pacific Ocean. His last wartime travel turned out to be during the last
battle in Okinawa when his ship picked up 1,000 Japanese POWs to take to the United States. By the time the ship had reached
Hawaii, the war had ended. Barney and his shipmates then went back and forth between Japan and the U.S., bringing soldiers
home. The final voyage for Barney was through the Panama Canal (during a hurricane!) and back to Norfolk, VA, where the ship was decommissioned.
Barney can count three separate times during his short Naval career where he almost lost his life. Honored to have served,
Barney wonders if he should have stayed in the Navy rather than return to Washington state to attend college. We’ll never know
how pickleball history may have been altered if Barney, the last living creator of our great sport, and founder of Pickle-Ball Inc.,
had taken a different course in life.

Excerpts of Barney McCallum’s life are from History of Pickleball – More Than 50 Years of Fun!
Alex Hamner and Jennifer Lucore experienced so much with Barney; The three of us talking pickleball all day long and exploring Bainbridge Island on those long car rides with Barney driving while he shared stories and posed “What kind of man …..” questions. Cheers to priceless memories forever!

​
Pickleball was invented in 1965 on Bainbridge Island, outside Seattle, WA.

Legend holds that this peculiar sport earned its name from “Pickles,” the founder’s dog but his wife insists that the name is instead derived from the mixed rowing crews found on pickleboats—a nod to the sport’s hybrid nature.

Pickleball didn’t go main stream until 2008 when seniors discovered it and it soared in popularity. 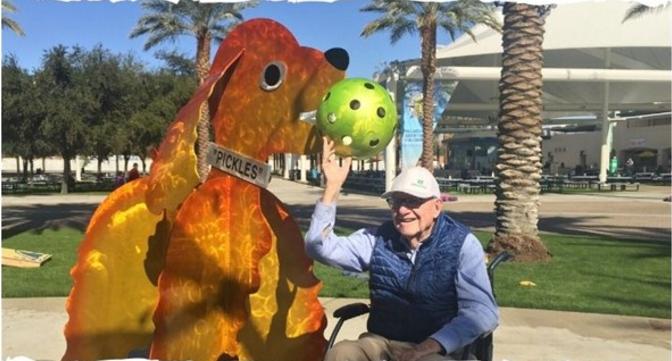