Designed and updated by Helen Proctor.

Comments and questions are appreciated. 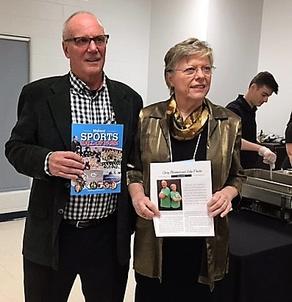 Pickleball is being inducted into a Canadian Sports Hall of Fame for the first time in history.

The 2018 Midland Sports Hall of Fame is inducting Garry Morehouse and Helen Proctor on Sept. 29 for their work in founding the Midland Area Pickleball Club and getting four outdoor courts built at Tiffin Park on a former tennis court.

“The reason we are excited about getting inducted into the Hall of Fame is it’s giving pickleball recognition,” Morehouse said.

Morehouse is associated with Pickleball Canada and researched the topic, finding no other inductions. In the United States, a pickleball Hall of Fame is being set up.

“It’s the fastest growing sport in North America,” said Morehouse from Tiffin Park on a bright sunny day where 16 people were playing on the four, blue-topped courts.

There was no one playing on the adjacent tennis court.

“Every morning you see this many people and the tennis court is barely used,” said Proctor.

Proctor is the founder of the Midland Area Pickleball Club and Morehouse is a founding director.

Morehouse said pickleball is typically played by older adults, but he wanted to develop the club for everyone.

“We wanted a club for all ages, all builds and all abilities.”

Prior to starting the Midland Club, Proctor and Morehouse were conveners at the Askennonia Senior Centre Pickleball Club.

“I thought my daughter would like to play this but she couldn’t because she wasn’t a senior. So that’s when we decided to start the club and make it available for younger people,” Proctor said.

But building the four badminton-sized courts on a single, underused tennis court is a solid accomplishment of the duo.

“I got the money, Helen did the design and (Mayor) Gord (McKay) convinced council it was the right way to do it,” Morehouse said.

The Tiffin courts are public. No membership is required to use them but the club promotes them.

“We negotiated so it would be free for everybody,” Proctor said.

Proctor and Morehouse also started pickleball at Waypoint Centre for Mental Health for staff and patients.

Pickleball is popular because a lot of people are transitioning from tennis. The court is a quarter of the size and it’s a low-impact sport, said Morehouse.

“It’s a much faster game than tennis so it’s much more fun,” said Proctor who used to be a tennis player.

In the winter, the club use the North Simcoe Sports and Recreation Centre’s gym one night a week and the Tay Shores Public School gym four nights a week.

The induction ceremony will be held at the North Simcoe Sports and Recreation Centre.

For more information about the club, go to its website: midlandareapickleballclub.ca.

The induction ceremony into the MIDLAND ONTARIO SPORTS HALL OF FAME was held on Saturday, September 29, 2018.

​If you cannot read the fine print on the plaque, here is what is written:

Pickleball began here in 2009 at Askennonia, but needed the leadership

provided by Helen Proctor and Garry Morehouse to flourish and

dedicated to the growth of the sport for players of all ages and abilities.

As demand grew, they were able to acquire the use of facilities at the YMCA

In 2015 the demand for places to play Pickleball continued to rise.

Helen and Garry decided it was time for Midland to have outdoor courts.

Helen devoted her time to the design and cost of turning one of the tennis courts in Tiffin Park into four state-of-the-art Pickleball courts. After months of negotiations and fundraising $17,000, the project commenced in the Spring of 2015 and was completed in August 2016. They further helped to secure Penetanguishene Council approval for dedicated Pickleball courts at McGuire Park.

Throughout this growth phase, Helen and Garry have offered training, set up clinics and run tournaments to help fuel the sport and encourage players of all ages and skills to be active. They keep over 200 members in contact via a monthly newsletter.

They have been Ontario 55+ Seniors' Regional Games executives, conveners at Askennonia Centre and four evenings a week at Tay Shores and NSSRC.

They have introduced Pickleball at Waypoint where it is still played by staff and patients.

Besides being competitive players, their advocacy extends to articles in Pickleball Canada, Focus 55+ Magazine, Springwater News, snapd Midland Penetang and the Midland Mirror.

Garry and Helen's vision of Pickleball in Midland and Simcoe County continues to evolve with advocacy concerning benefits to those experiencing chronic health issues and to establish a dedicated indoor facility providing up to 12 courts.

Here is a link to the news article that recently appeared in The Mirror: 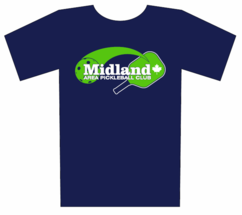 Helen Proctor, left, and Garry Morehouse will be inducted into the Midland Hall of Fame Sept. 29 in the builder category, for their work in developing the Midland Area Pickleball Club and four public outdoor courts. - Gisele Winton Sarvis/Metroland